When Oatly opened its factory outside of Landskrona in the southernmost part of Sweden in August last year, it was the end of a frustrating situation of not being able to fully meet the growing demand for its products.

When we visited the new plant it had been in commercial production for approximately three months. Before then, the company’s products were manufactured by sub-suppliers – mainly by the dairy company Skånemejerier at its premises in Lunnarp where it had reached its limits.

“During the last few years the demand for our products has increased tremendously, and in the last year or so we have not at all had the capacity to satisfy this demand,” says Per Erik Nilsson, Managing Director of Oatly. “Therefore we are extremely pleased with our new plant that will eventually enable us to produce 25 to 30 million litres a year.”

“We have had a smooth start with few teething problems and we keep increasing the production all the time,” he continues. “Now we can finally start to stock up. We count on a production of some 10 million litres and a turnover of 100 million SEK this year (2006). We envisage a yearly growth of at least 30% in the years to come. We benefit greatly from the health trend, but we are growing faster than our market that has a general growth of some 20%.”

Oatly develops, produces and markets unique oat-based, non-dairy food products such as oat drinks, an alternative to cream in cooking, vanilla sauce and ice cream. Since these products contain no lactose, milk protein or soy they are suitable for people who suffer from lactose intolerance or are allergic to milk or soy protein. But the products are also greatly appreciated by a growing number of generally health-conscious consumers.

The Oatly products are good for your health – no question about it. The good balance between carbohydrates, protein and fat is well adapted to human nutritional needs. The fat which is a natural component in oats has a good fatty acids combination with a large proportion of monounsaturated fat. Oats are also rich in soluble fibres that decrease cholesterol levels.

Oatly uses specially-selected oats from the Swedish region of Mälardalen, where oats with the best health qualities are cultivated. Presently, Oatly has a yearly consumption of almost 2,000 tonnes of oats.

Oatly’s patented Oat Drink is the result of 10–15 years of research and development which has enabled the transformation of all the healthy qualities of the oats into liquid form. The company was the first to launch an oat drink on the world market and is a world leader in its niche. The R&D work is strongly linked to Lund University where Professor Rickard Öste has played a key role in developing an initial idea in the laboratory into an internationally operating company.

The first oat drink was sold in the United Kingdom in 1995. Between 1996 and 1999 Oatly products were launched in Scandinavia and the rest of Europe and a broad range of Oatly products have been available since 2001.

“So far, we have focused the resources on our three major markets Sweden, Finland and UK which account for some 80% of our sales,” says Per-Erik Nilsson. “We are market leaders in Sweden. If we include Solhavre, ICA’s own brand, we have conquered 65% of the Swedish non-dairy products market. In these three countries we have made the large investments that are required to sell our products through the convenience goods chain. On other markets we sell through health food stores. We don’t have our own sales force but develop the market through different partners. In Sweden and Finland our sales channel is Skånemejerier, our ice cream is sold by Sia Glass and we have 17 distributors in other countries.”

Per Erik Nilsson has worked twelve years for Tetra Pak in different countries – valuable experience for his new job. “Selling milk and communicating its health benefits in the Middle East and Europe has much in common with what Oatly is doing today,” he says.

Oatly’s largest products are the H and H+ (enriched with vitamins and calcium) drinks with natural flavour which can replace milk and which are marketed with the slogan “Instead of milk.” They account for 80% of the company’s sales.

“H and H+ have a soft, smooth oat flavour and a fat content of 0.7% or 1.5%. You can drink it or use it in cooking and baking,” says Oatly’s Marketing Manager Cecilia Hansen. “The good taste and the nutritious values of oats that are beneficial both for your heart and your stomach is what we put forward in our promotional activities.”

She proudly reports on consumers’ blind tests in USA and UK where Oatly oat drink was tested against the leading soy products on these markets. The results were impressive; 90% preferred the taste of Oatly!

Another of Oatly’s best sellers is iMat, a completely vegetable alternative to cream. iMat contains only 13% fat – mostly unsaturated.

Oatly’s product range also includes oat drinks with flavours such as chocolate and strawberry, highly appreciated by children who are intolerant to cow’s milk, and drinking yoghurt flavoured with apple/ green tea and strawberry/wild berry. The company also produces oat-based ice cream with different flavours and niche products such as ready pancake batter and vanilla sauce.

“Our marketing activities are directed towards our two main target groups,” Cecilia Hansen continues. “The first is allergic people whom we reach through dieticians. This is a relatively easy group to target; loyal and limited in numbers. The other target group, health conscious people in general, is more difficult to reach. These people have a lot of products to choose from, so this is where we have to put resources in order to stand out and get people to understand the benefits of oats and of our products.”

So far, Oatly has taken only rather modest steps out on the world market. The company has 0.5% of the global non-dairy food market today. Considering the fact that it has managed to take 65% of this market in Sweden, the potential on the global arena seems breathtaking.

One interesting initiative that gives hints of future opportunities is a cooperation project with a large food company in Japan. Oatly has started to produce oat base in powdered form for this company with the help of a Swedish partner who performs the drying operation on Oatly’s behalf. The powder will be recombined in Japan, and the products will be flavoured and packaged in accordance with Japanese consumer preferences. “Fortunately, this process does not at all influence the taste or nutritional quality of the final products,” says Per Erik Nilsson. “Right now we are fine-tuning the process in Japan and advising the customer on what equipment to choose and how to communicate the benefits of oat products.”

“We are eagerly awaiting the results of this test project in Japan, the largest health food market in the world. If it works out well we can certainly explore elsewhere. But we are very small so far, and we have to take one step at a time,” Per Erik Nilsson concludes.

The production process at Oatly’s new factory in Landskrona, Sweden starts with mixing oat grains with water and grinding. In the following processing steps the starch is converted mainly into malt sugar which gives the pleasantly round taste and body of the oat base.

The water-soluble fibres are kept in the product, but 70 to 80% of the insoluble fibres are removed by an Alfa Laval Foodec 510 decanter centrifuge that has contributed to a better product composition. After homogenisation for obtaining a smooth product, the oat base is ready for further processing into consumer products that are finally aseptically heat treated and packaged in 250 millilitres and one litre Tetra Pak Aseptic packages.

A number of heat exchangers from Alfa Laval are installed for heat treatment duties including Frontline wide-stream versions that prevent clogging.

Alfa Laval fluid handling equipment is also used throughout the process including some 20 pumps of different types and sizes, 230 SRC (Sanitary Remote Controlled) valves and some 30 Unique Mixproof Valves with ThinkTop control units.

Alfa Laval has supplied its equipment through the engineering company Editec AB. “We chose Alfa Laval since we have known them as a trustworthy supplier for a long time,” says Jan-Olov Forslund, Managing Director of Editec.

The fact that the three companies Oatly in Landskrona and Editec and Alfa Laval in Lund can reach each other within just a quarter of an hour is important to successful cooperation. Jan-Olov Forslund, Olof Mårtensson, Quality and Technical Development Manager of Oatly and Gustav Ocsko, Area Sales Engineer, Sanitary Equipment of Alfa Laval Nordic can meet whenever needed.

Alfa Laval Nordic can meet whenever needed. “Alfa Laval was involved from the very beginning when we started our small-scale production at its pilot plant at Skånemejerier in Lunnarp some ten years ago and they have followed our development since then,” says Olof Mårtensson. “Editec took on the project management in 2002 when we decided to build our own pilot plant at the Ideon R&D centre in Lund and it was natural for us to continue the good cooperation when building this plant. We are now a closely-knit team that works very well together and has ongoing discussions how to move Oatly forward.” 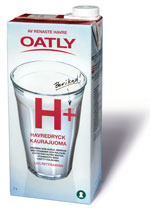