Technology evolution coupled with government regulations and incentives have set off a new surge of interest in large-scale solar power production. Spain and the United States are the two countries leading the development in concentrated solar power (CSP), building huge solar power plants.

In the US, CSP plants have been up and running since the 1980s, but new government regulations triggered a new wave of investments in 2006, and there are dozens of projects under way. Meanwhile, the Spanish government has triggered huge investments in solar power through feed-in tariffs, making CSP plants a profitable business.

Compared to photovoltaic (PV) technology, which generates electricity directly from solar radiation, CSP technology uses large sun-tracking mirrors to concentrate solar radiation, which is then absorbed by a heat-transfer medium that subsequently transfers the thermal energy to make steam. Steam turbines power an electrical generator, creating electricity. Based on these principles, there are different types of CSP technologies – for example, parabolic trough and solar tower systems (see facts box).

"CSP technology is cheaper than PV when installed in areas with lots of sun and clear skies for most of the year, because you can concentrate the solar radiation," says Cédric Philibert, senior analyst at the Renewable Energy Unit at the International Energy Agency (IEA). While PV solar power costs about 25 euro cents per kilowatt hour, solar power from CSP costs 13 to 20 euro cents per kilowatt hour, depending on the location, he says.
Thanks to the thermal phase, CSP plants can have a guaranteed capacity. "Storing heat is much cheaper than storing electricity," explains Philibert. "It's better to store the heat before turning it into electricity." 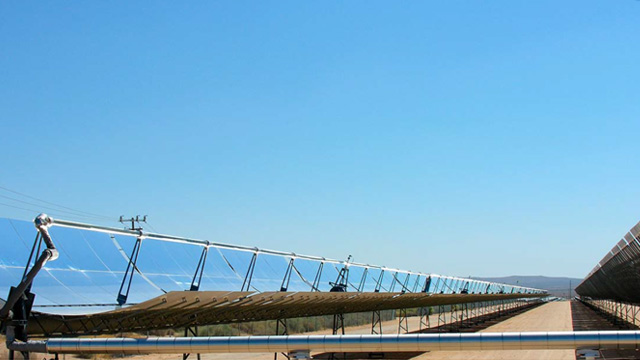 CSP plants can also be equipped with backup systems using fossil fuels at little extra cost, to make sure the plants can be run even in times of long cloudy days.

CSP plants are usually built in areas where the peak load takes place in the summer and the electricity is mostly needed for air conditioning, not heating. In those places available solar radiation coincides with peak demand.

One such area is Sanlúcar la Mayor, about 32 kilometres west of Seville in southern Spain. There the company Abengoa Solar is building the Solúcar Platform. When completed in 2013, the platform will cover an area of 800 hectares. It will have 10 solar power plants with a total capacity of 300 megawatts, which is enough energy to supply 153,000 households while preventing 185,000 tonnes of carbon dioxide emissions annually. More than 99 percent of the capacity will be generated using CSP technologies.

Alfa Laval has so far supplied plate heat exchangers to three of the Solnova plants. Each Solnova plant uses two T20 units and one M6 unit. The Alfa Laval T20s are used to cool down the components of the turbine, while the Alfa Laval M6 model is the blow-down cooler of the heat-recovery steam generator. "We considered the Alfa Laval heat exchangers the best overall option, given the technical economic relationship," says Ana Cabañas Burgos of Abengoa Solar. "We have used them in the past in other types of plants with satisfactory results."

Philibert of IEA says plenty of areas in the world are suitable for CSP technology. In addition to southern Spain and the southwestern US states, CSP plants would be effective in Mexico, Australia, countries in the north and south of Africa and in all countries located in a belt stretching from the Middle East to central Asia and China.

“We considered the Alfa Laval heat exchangers the best overall option, given the technical economic relationship. We have used them in the past in other types of plants with satisfactory results.”